In this issue we feature Graham Watson, one of the most awarded advertising creatives of all time. His work spans spells at Collett Dickenson Pearce, TBWA and Bartle Bogle Hegarty, three of the driving forces in what is now known as the golden age of British advertising.

How did your relationship with The Chase first start?
I first met Ben with John Hegarty when we went to look around The School Of Communication Art, and met up with John Gillard who ran it.

I was on the D&AD Executive Committee at the time and Ben was involved in setting up the D&AD student awards. I remember he told me that as a tutor, he had just finished a three month ‘refresher’ stint at Lowe Howard-Spink, a breakaway from CDP where I had worked for seven years, so we had a lot to talk about. That’s me at lunch in Schmitt’s German restaurant in Charlotte Street in London. We look like a rock band! I was working with John O’Donnell at the time. He’s on my right, then Tony Kaye and Paul Weinberger. Alan ‘Lofty’ Lofthouse is on my left. I had left CDP to join TBWA by then. We used to meet up at The Roses Awards in Manchester, where my mate, Glen Maltby was on the committee. Great memories! 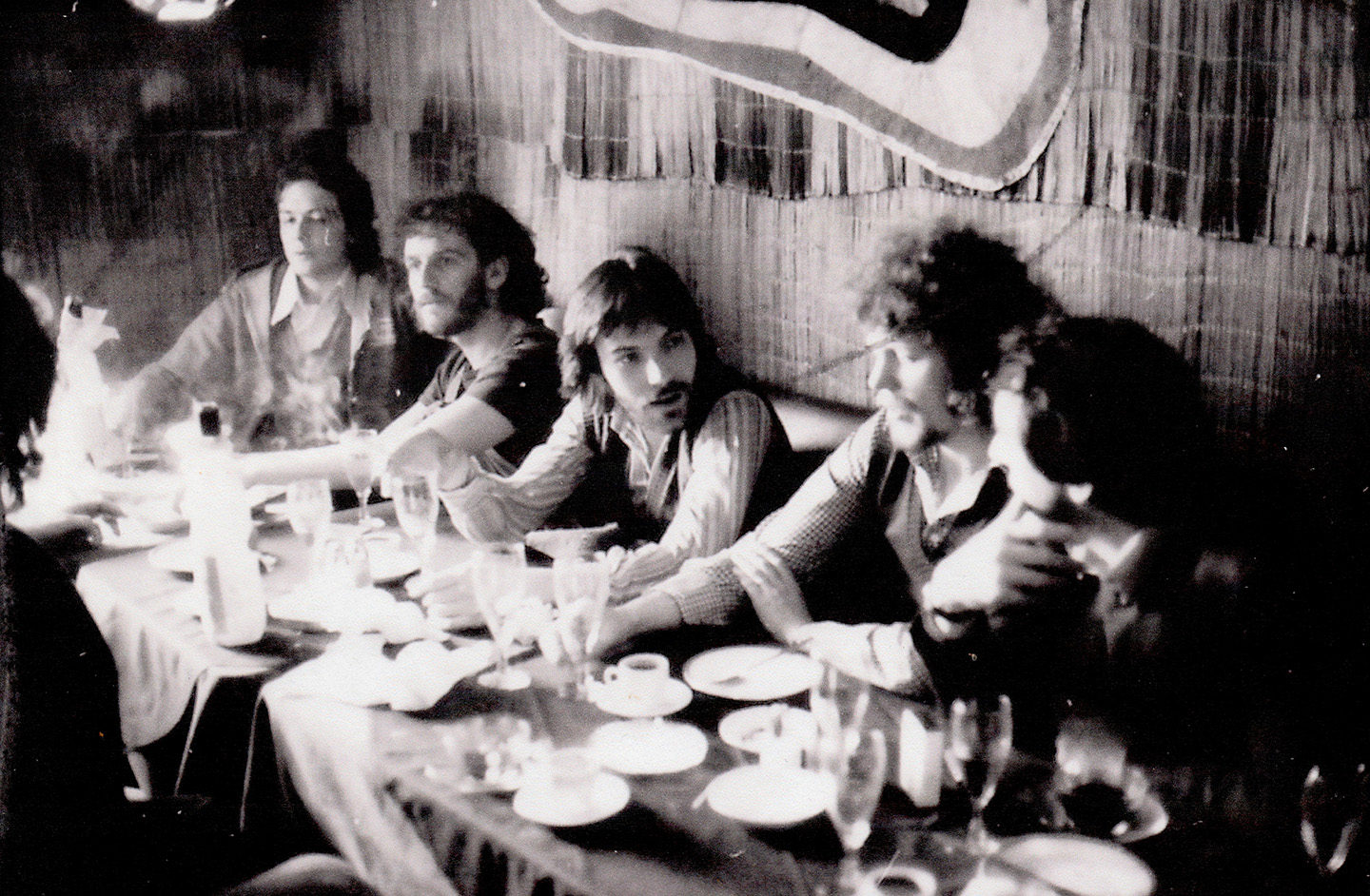 One year, after leaving the awards, we went across to the Brittania Hotel where we were staying, and ended up in the bar having a drink with Michael Hutchence and INXS. The next time it was Tom Jones!

Ben and I then became External Examiners at Manchester Art College. A bit ironic, considering they turned me down when I applied to their Dip. AD course.

In 1991, I volunteered to design the 29th D&AD Annual. The brief in those days was to feature the pencil in some way. 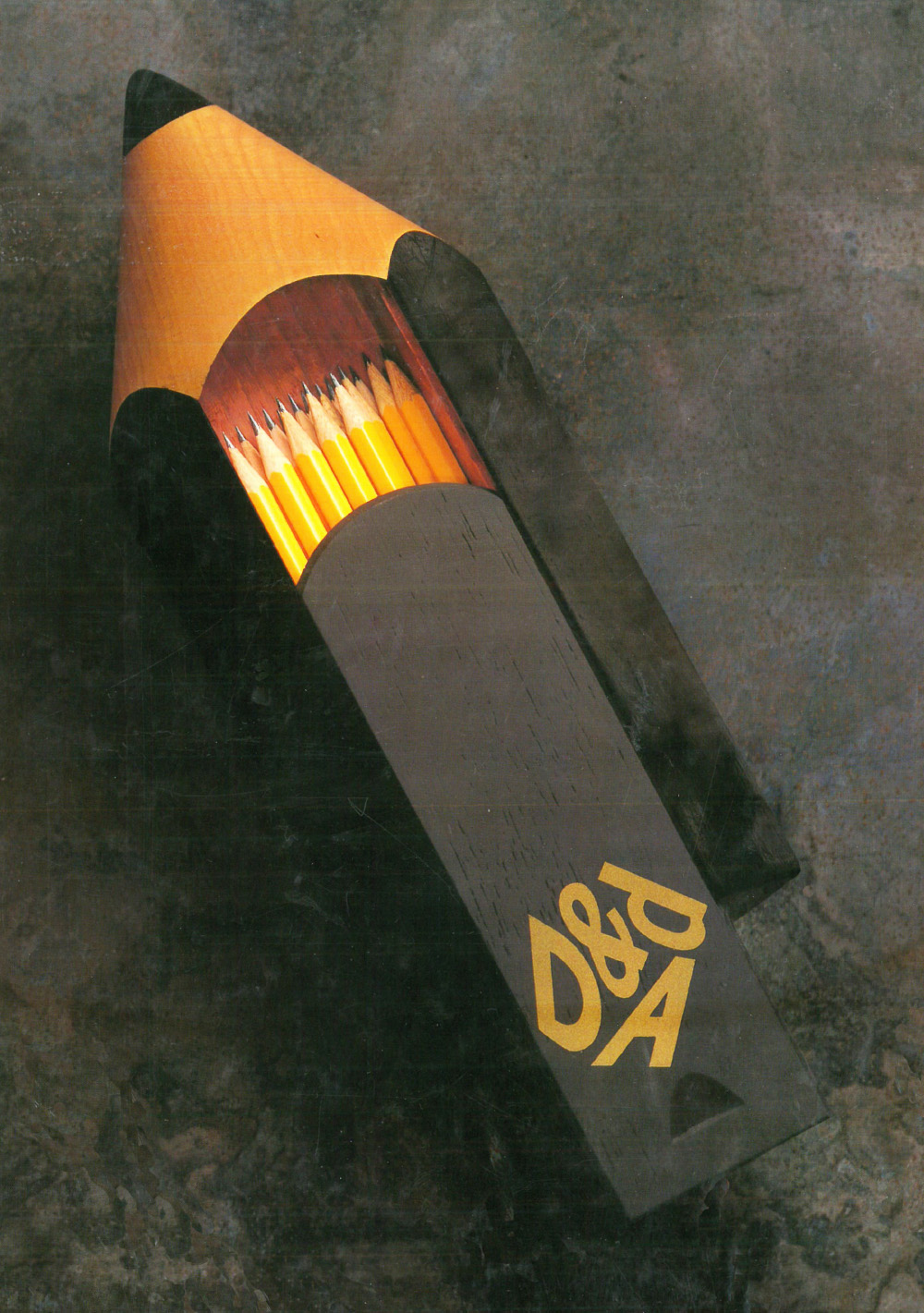 The Chairman at the time was Edward Booth-Clibborn, and he said money was very tight that year. Too tight to pay for a decent photographer to take the photo’s of the juries. So I suggested hiring a photo booth for £110. That’s when I realized that Ben was a bit of an original. Most jurors sat still and took 4 identical photo’s. Not Ben, he put a bit of thought into it.

That year, I even got a very young Steve Coogan to present the D&AD Award night. He was cheap at the time. 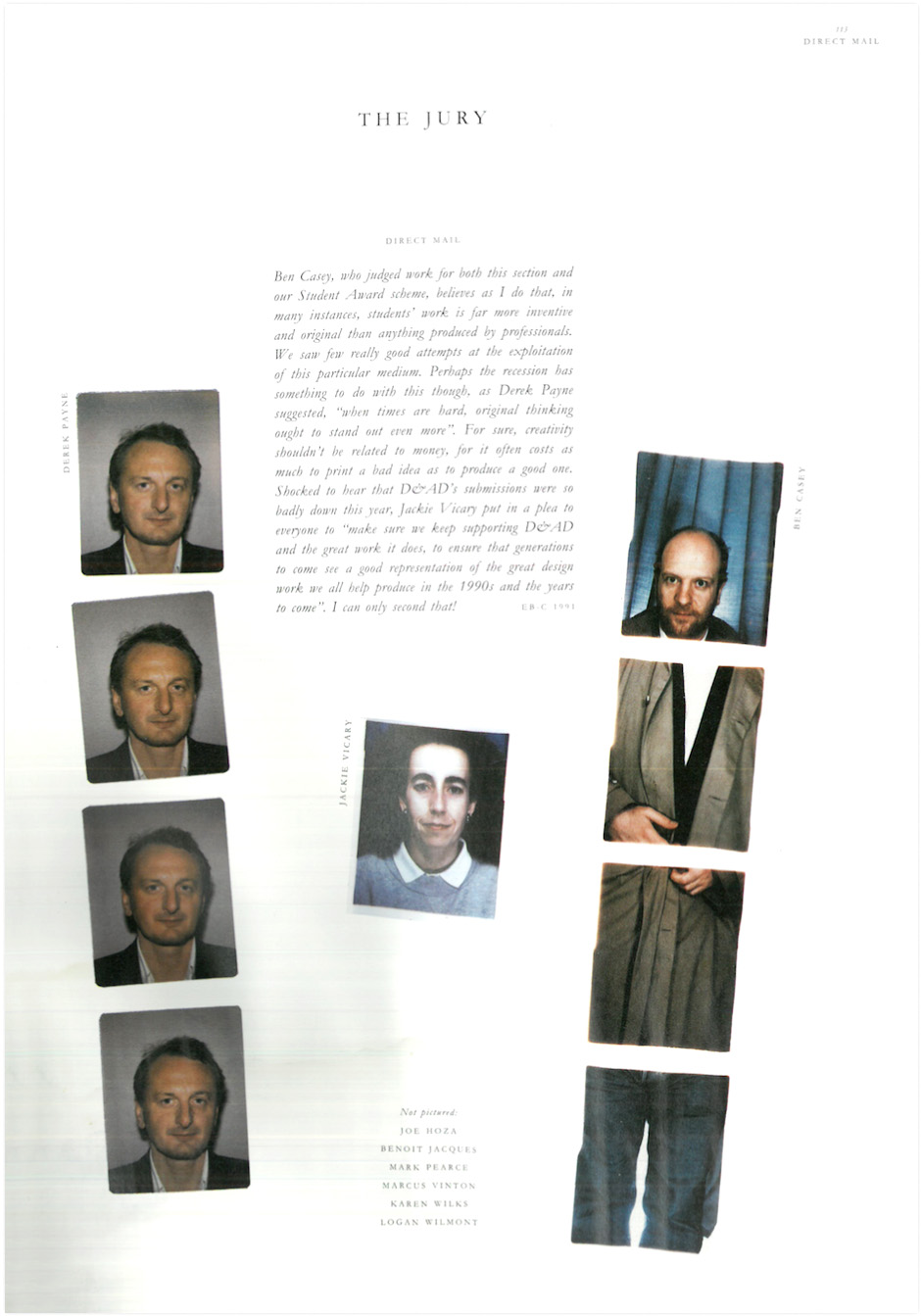 Can you briefly describe what you’re now involved in and pick out the key moments along the career path that took you there?
I’ve gone back to Art College and I’m now a Director of a Bondi based Art School called the Waverley Woollahra Art School. I’ve even won their annual print prize for a woodcut I did. Last year I was a finalist in The Burnie Print Prize in Tasmania for my Lighthouse Trilogy, which is the most prestigious print prize in Australia where I now live. Sunrise, noon and sunset. 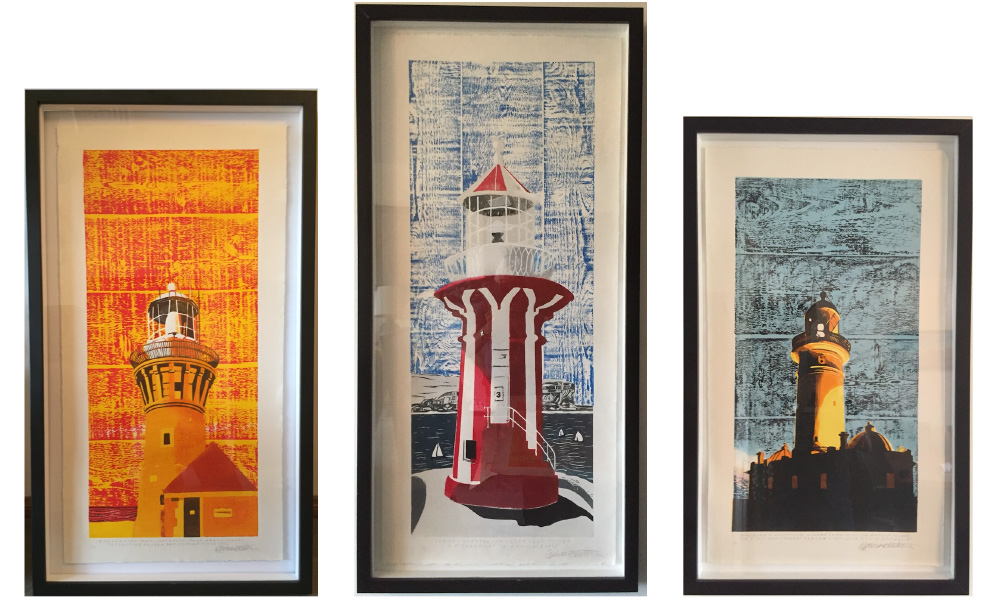 Always been a fan of David Hockney, who was at Bradford Art College a few years before me. I also met up with George Underwood, when I briefed him on an illustration for an ad. He’s made a living out of painting for 50 years now. He went to art college in Bromley with David Bowie and was in the David Jones and the King Bees Band as rhythm guitar. But the manager of the band told him to make up his mind what he wanted to do – be a musician or an artist. So he left his best mate, Bowie, and moved on to an impoverished (most of the time) life of art.

He’s taught me a lot about the art of painting, especially the technique. I’ve just painted the portrait of Professor Fred Watson, who lives here in Sydney, Australia, but originally from Bradford, Yorkshire. He’s the Astronomer at Large in Australia and his love is the Aurora Borealis. 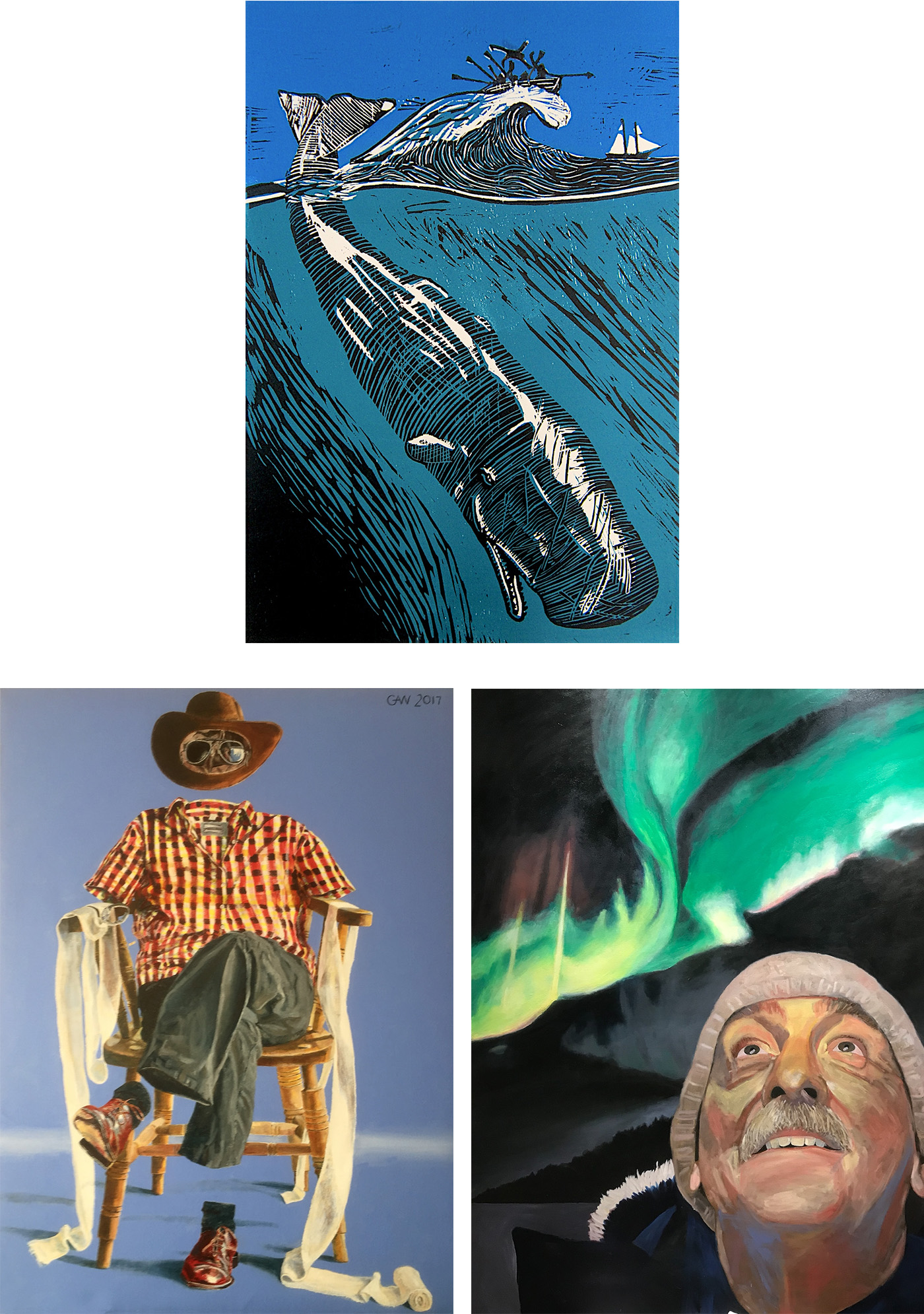 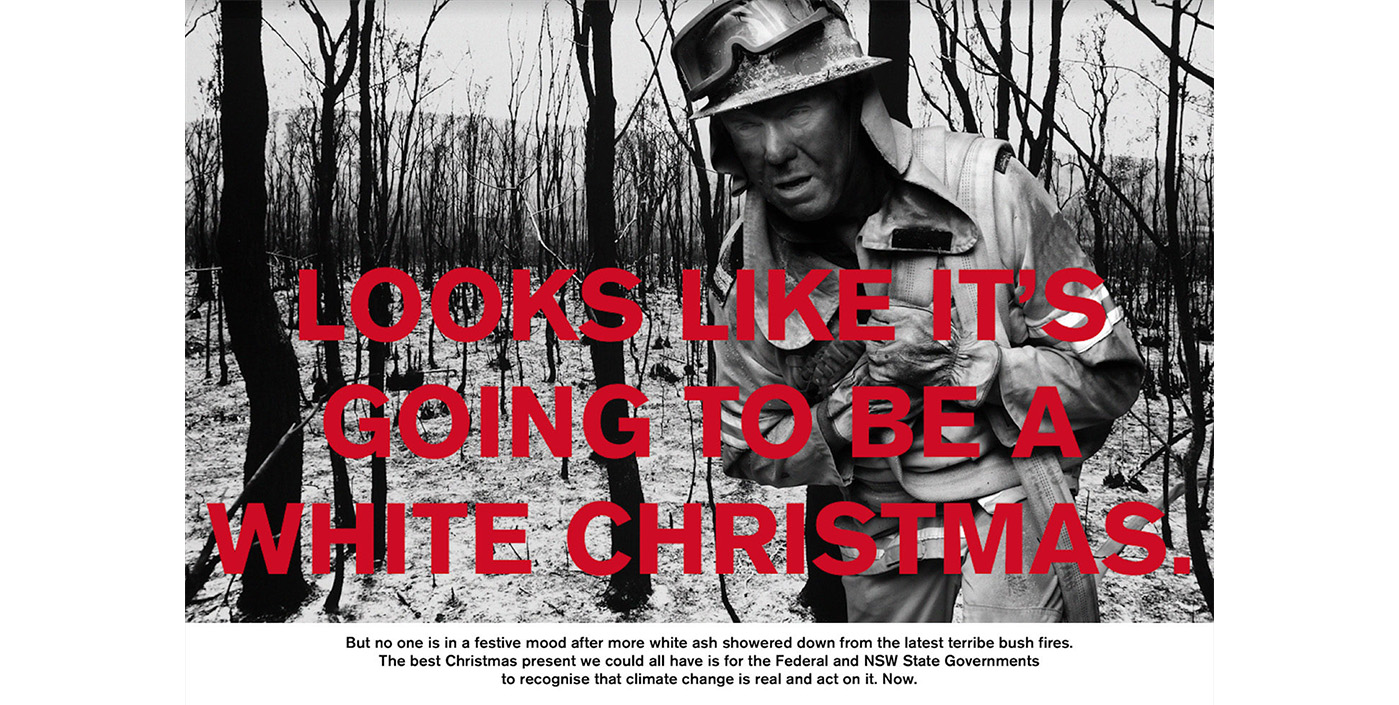 I still do the odd ad for charities and Climate Change. That’s my ad I did for the terrible bush fires this Christmas. That’s white ash from the trees.

Is there an individual that you feel you owe a debt to, especially in the formative stages of your journey?
The Creative Director of Garland Compton Advertising in London was called Bob Bellamy and he came up to Bradford Art College and gave us a talk about Advertising. He really fired us up and gave us an understanding of the creative process. I’d been thinking about becoming a Graphic Designer, but he change my thinking, because the advertising business seemed so exciting.

Funnily enough, my art teacher at secondary school was called Turner, David that is, not Joseph Mallord William. He was a brilliant teacher, but his criticism of my work was I didn’t understand colour. That’s probably why most of my work these days is so colourful.

Any regrets?
Not really a regret, but I was offered a job as a designer at the BBC when I first left art college, but I turned it down, because I thought if I was an art director in advertising, I could be a designer and an art director.

I then had 82 interviews over the next 5 months before I got a job in advertising as a junior visualizer.

I ended up drawing my shoes which had worn out, and sent out 3 of them to advertising agencies. I was offered 3 jobs. Crazy eh! 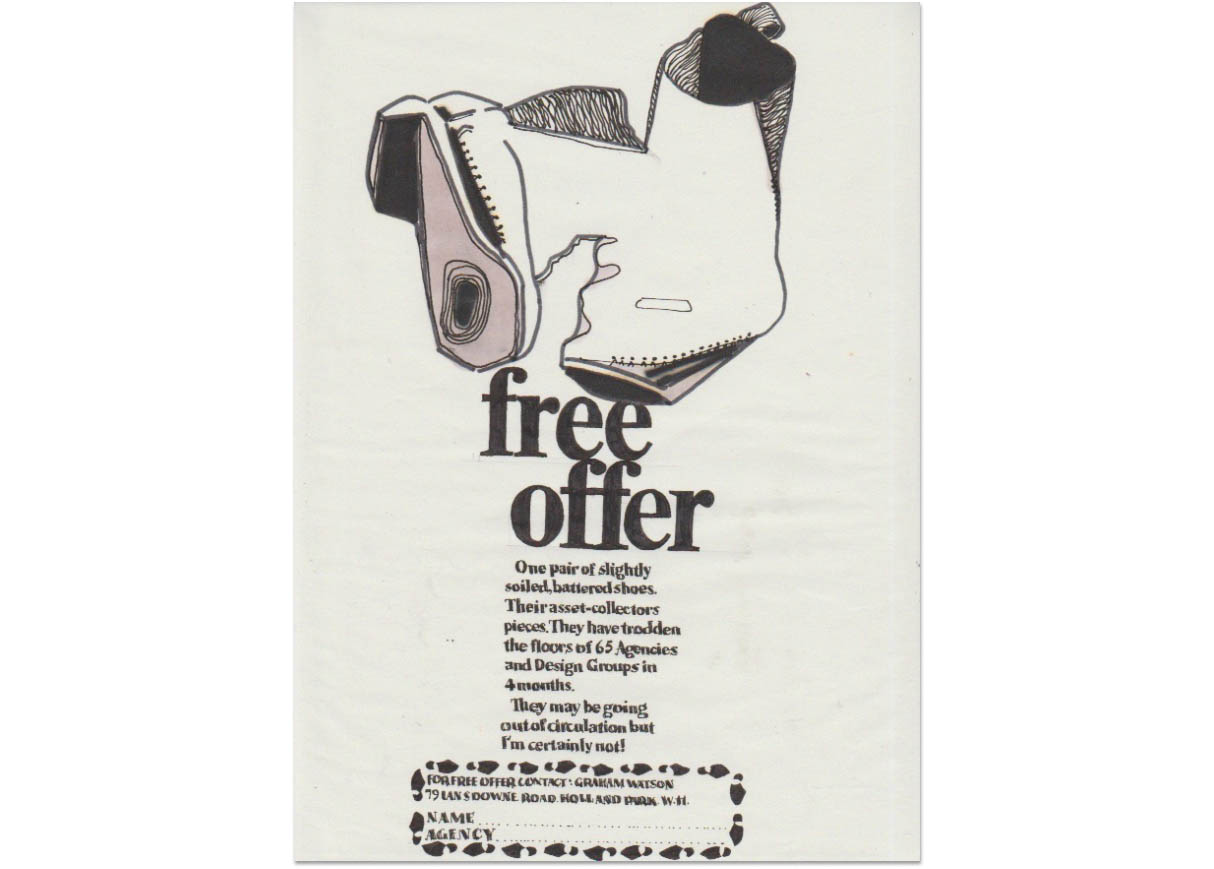 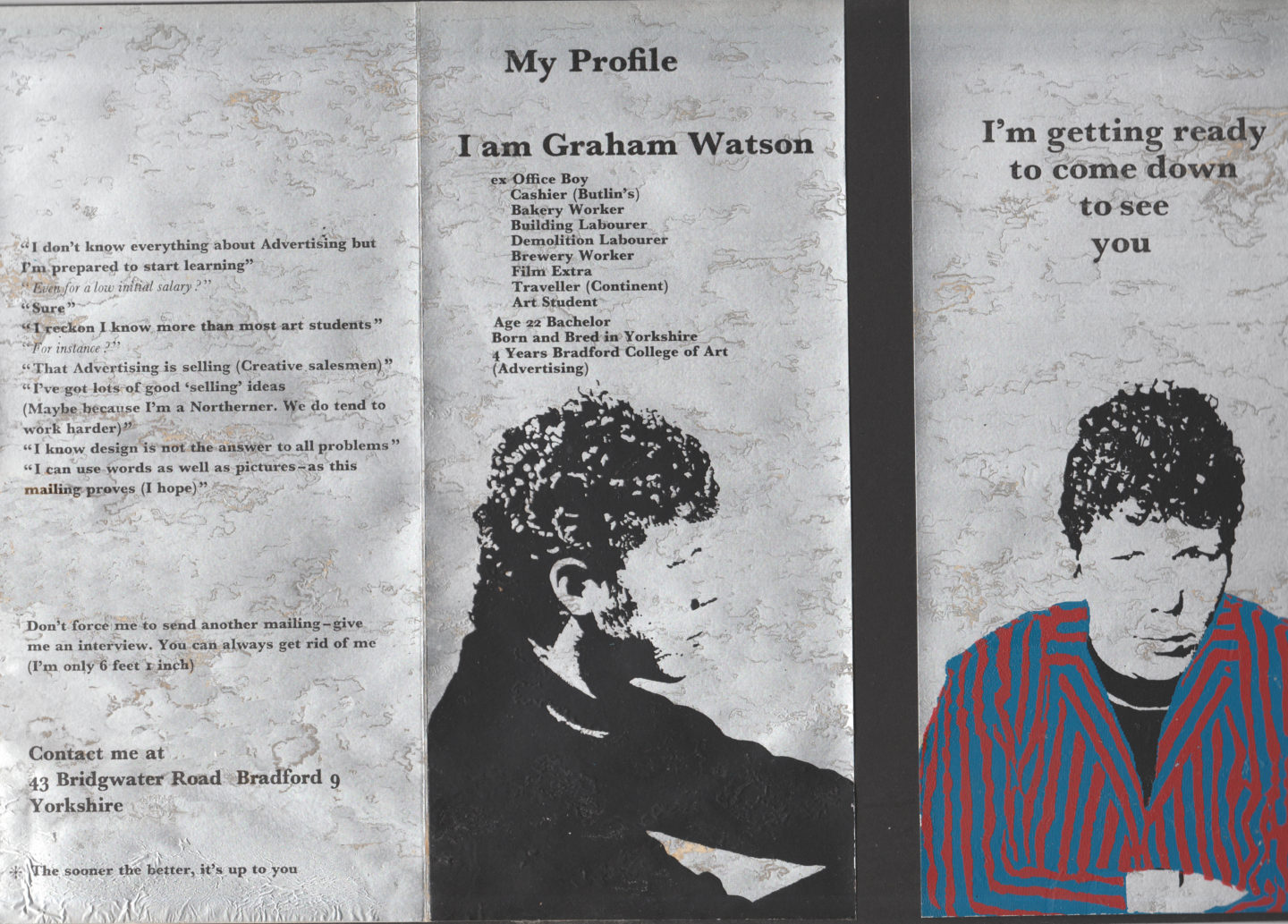 Can you select 6 pieces of work that you are most proud of and briefly describe their significance?
A difficult question, because I’ve got a lot of award winning work. On D&AD’s 50th anniversary I was named as one of the top 20 most awarded art directors in the world.
But some were special.

My first D&AD Silver award for a poster was B&H ‘Flying Ducks’. 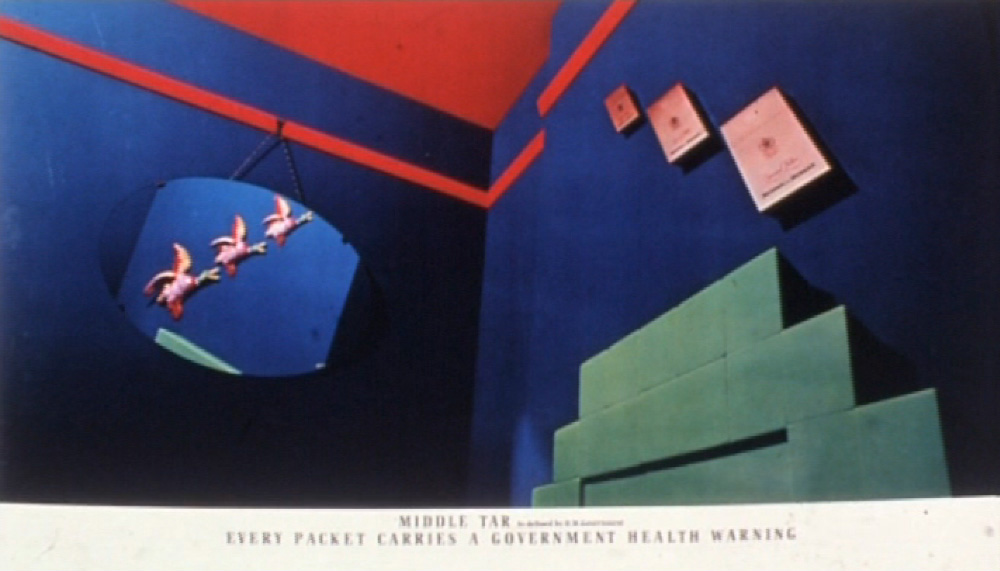 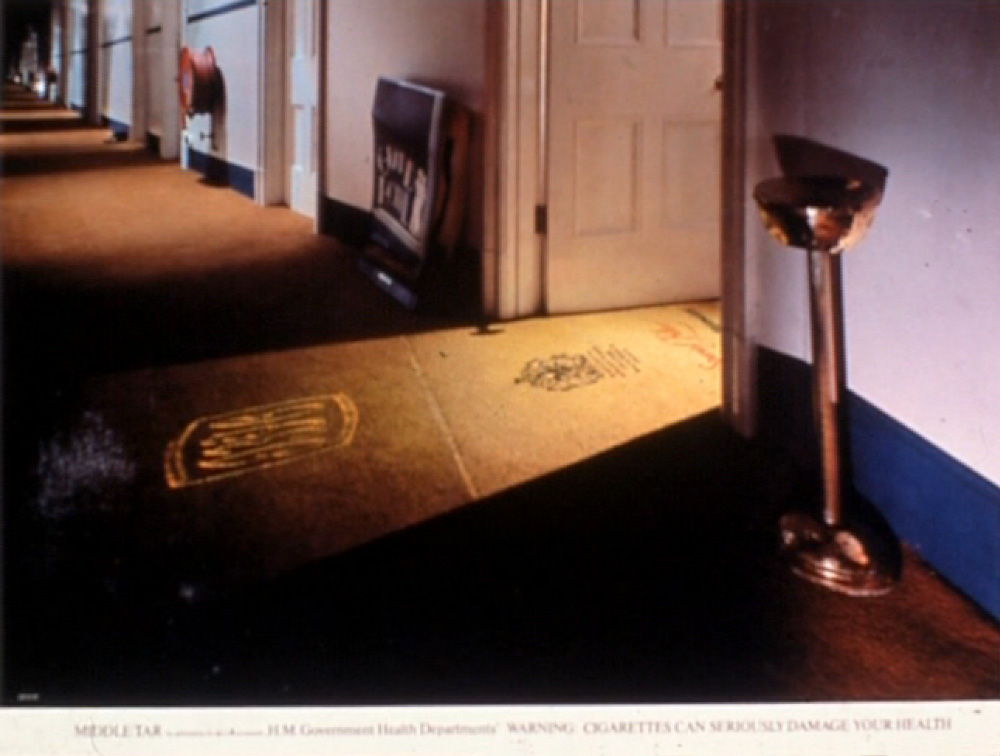 My first D&AD Gold and Silver for a TV commercial was for Lego ‘Kipper’.

My first D&AD Silver for a press campaign was for Murphy’s Irish Stout. 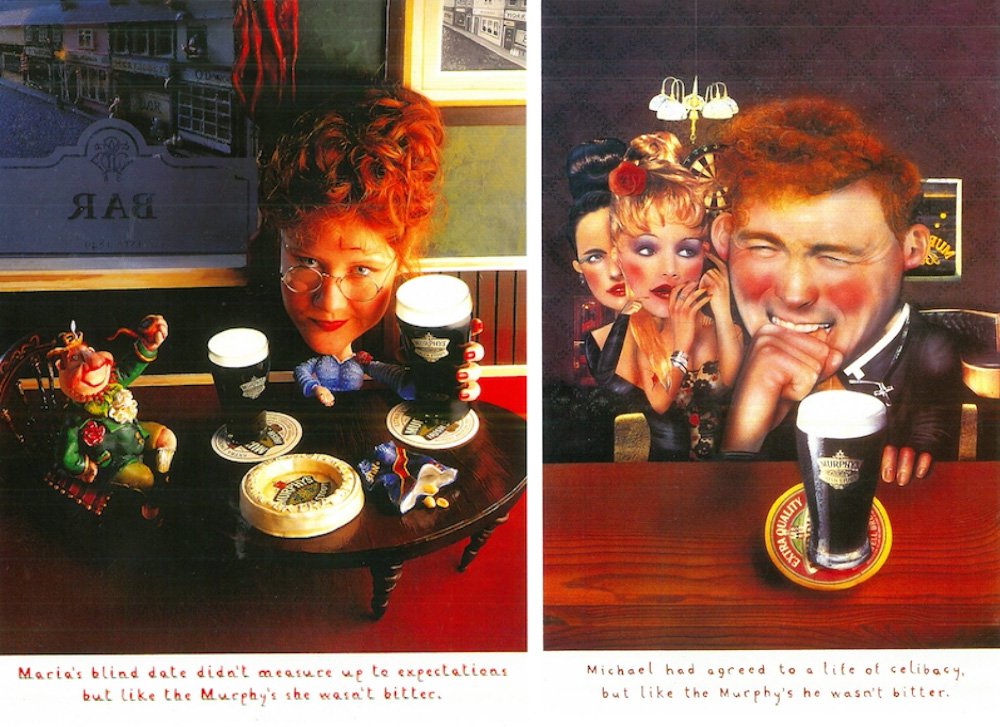 My first D&AD Silver for a cinema commercial was for Speedo ‘Seabed’.

My first Silver Nomination for typography was for Levi’s ‘Thumbprint’. 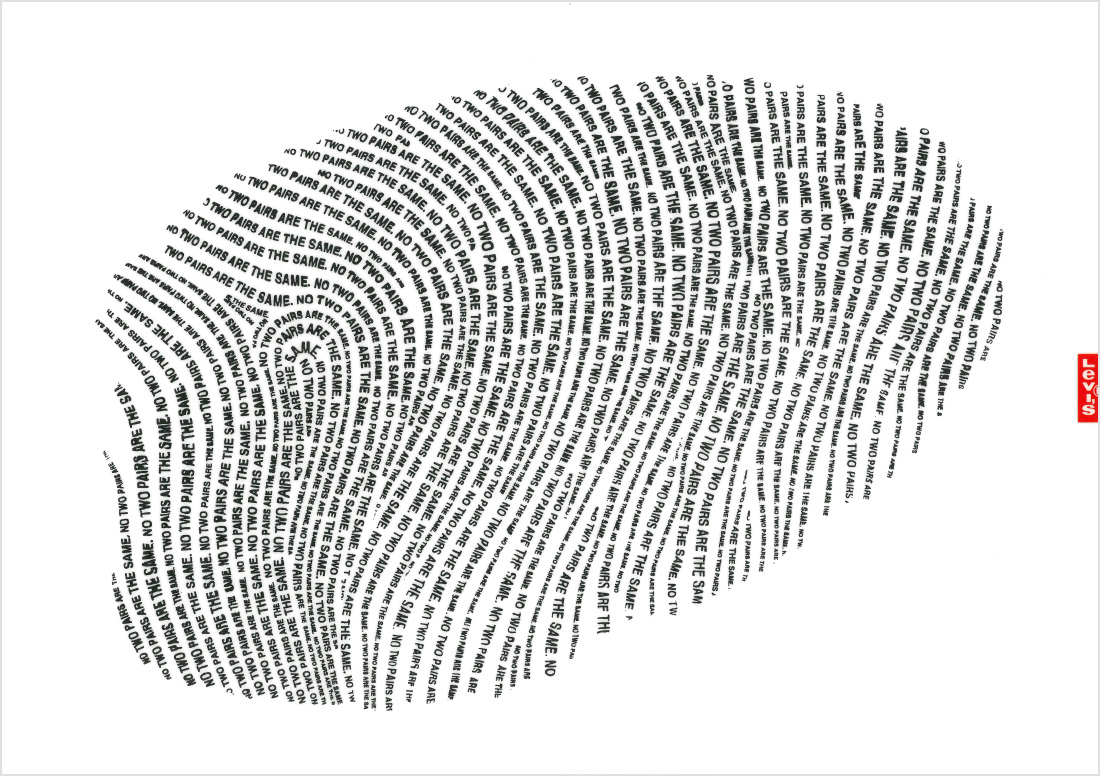 And lastly, one campaign that’s close to Manchester’s heart. I was group head on the Boddington’s campaign. I remember reviewing the campaign that Mike Wells and Tom Hudson had conceived for the campaign. They had the most amazing visuals based on cream analogies, but their campaign had only the visual and the Boddington’s logo. I remember saying that they needed a line to encapsulate the concepts, and off the top of my head I said something like ‘The Cream of Manchester’. Sounds obvious of course, but the rest was history. It became the best selling beer in the UK.

A few years later I did an extension of the campaign and won a Gold at Cannes for a press campaign. One of which is the sun cream one. 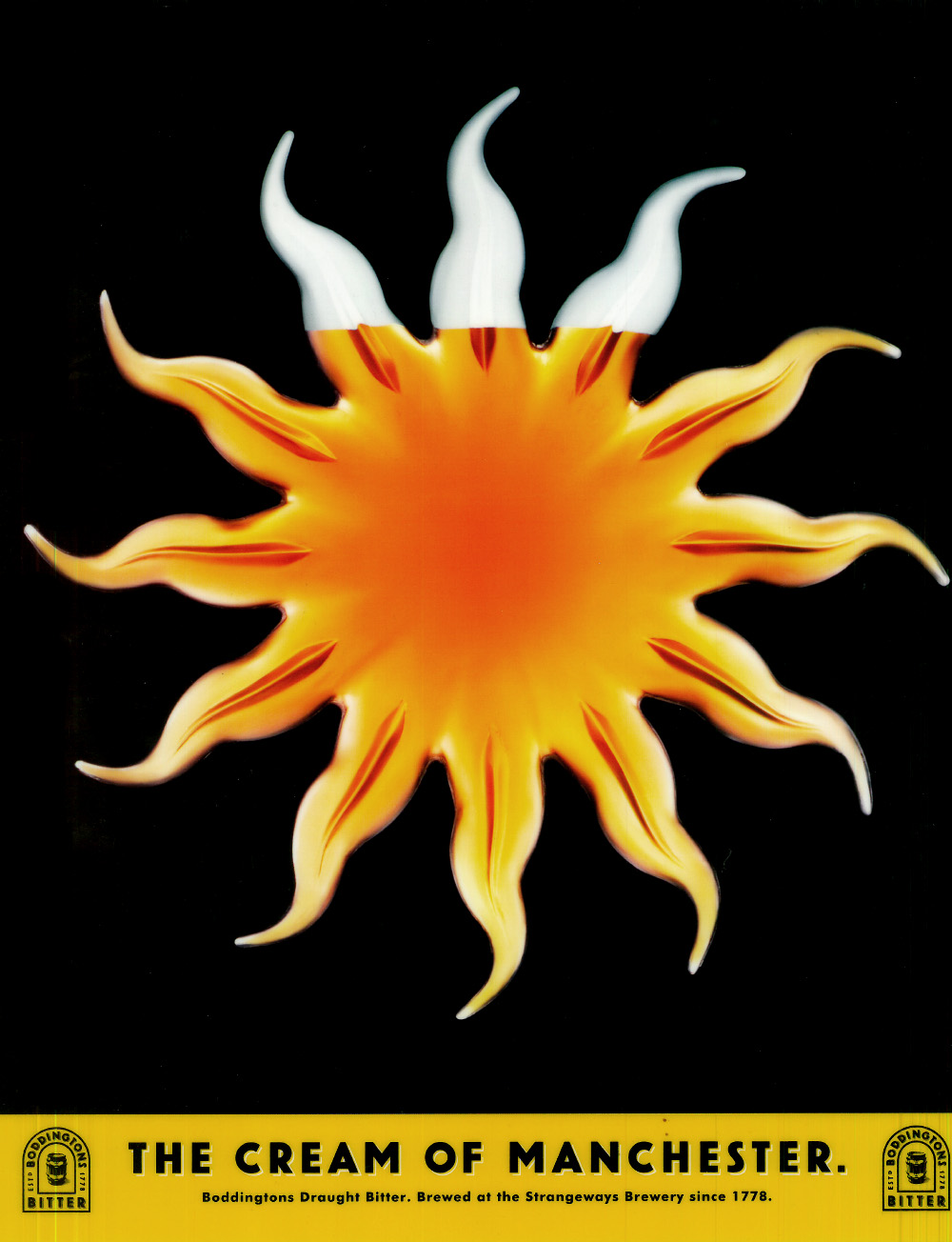 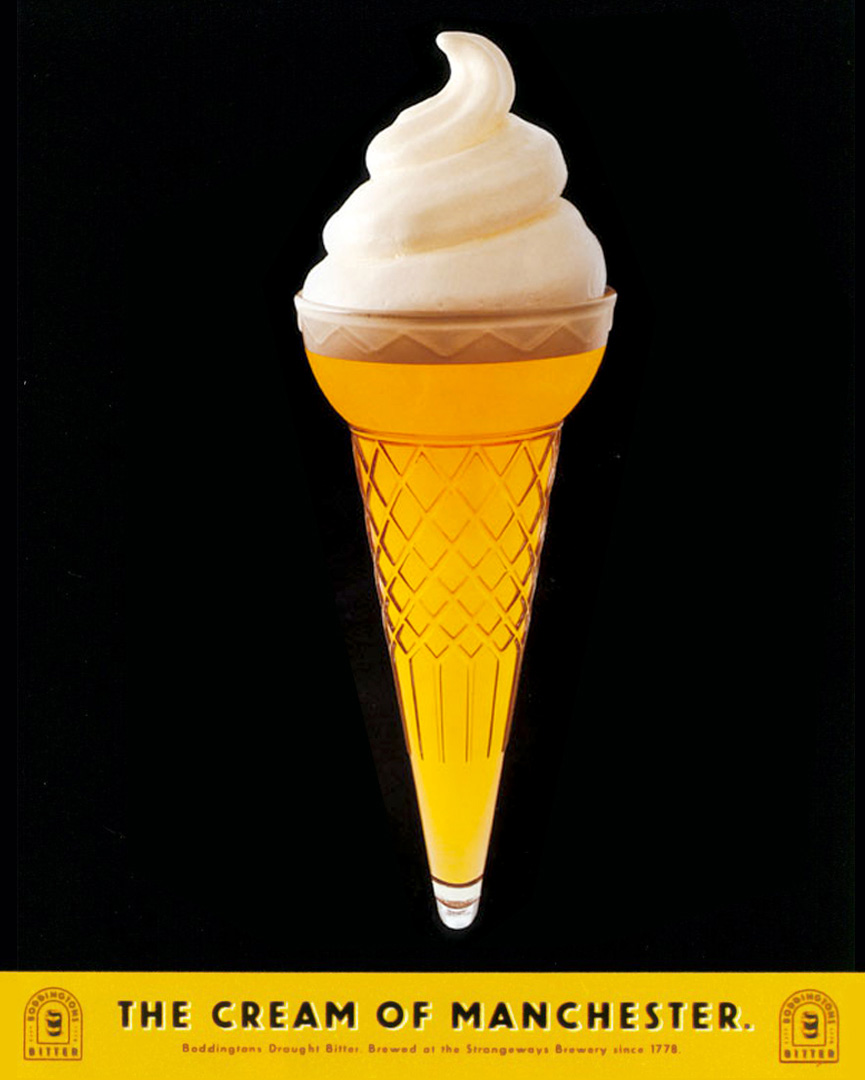 Is there a particular person whose work has influenced you?
When I worked at CDP, I remember the Creative Director, John Salmon suggested I should take a look at the art direction of Helmut Krone, who worked at DDB in New York. Brilliant.

A quick bit of advice to anyone starting out?
My motto was always: ‘Nothing ventured, nothing gained’. Be tenacious and try anything.

Final word
I think I was lucky to work in the Golden Era of Advertising in the UK when anything was possible.

Are creative people still having so much fun?