Many of us will have come across Freda Sack’s work, perhaps without even realising it. Her bespoke typefaces and logotypes have graced stations, national newspapers and banks. A dedicated and highly accomplished type designer and typographer, she was in her own quiet way a trailblazer, bringing together the best of craft and technology with unparalleled knowledge, understanding and talent.

Her career began when she joined Letraset in the 1970s, having graduated from Maidstone College of Art with a love of letterforms. Although Letraset might not now conjure up images of cutting edge technology, at the time, it defined and led industry standards. Her determination and tenacity shone through in the five years she spent honing her craft of type design and stencil cutting. Her skills were the stuff of legend, as was her ability to see what was wrong with a letterform – and more importantly, in her mind, how to put it right.

Her reputation and portfolio grew, along with opportunities. In her time with FONTS she created typefaces for Stempel, Berthold and Linotype, as well as corporate work for clients such as the Post Office (among many others). She returned to Letraset in 1980, this time helping develop a range of new, digital typefaces and finding ways to make the design software more intuitive and user friendly— a very different way of working to what we know now.

In 1983, Freda set up by herself, rapidly establishing her name designing logotypes and typefaces for leading agencies and clients such as NatWest and the Science Museum. She collaborated with the Daily Telegraph on headline typefaces, and once again, with Letraset.

A new era in design and typography was heralded by the arrival of the Macintosh (Apple Mac) computer, which allowed designers to create and publish their own fonts. Freda set up The Foundry, one of the first independent type companies with lettering designer David Quay. D&AD award winning work followed for the Yellow Pages working with Johnson Banks and commissions for custom designed fonts including Brunel, the typeface used in every mainline station in the UK.

Freda was a dedicated supporter of others coming up and into the business, with many type designers benefiting from her knowledge, warmth and generosity of spirit as she mentored them. Through her work with the International Society of Typographic Designers (ISTD), she helped improve standards and enhance educational opportunities as well as promoting type design globally. She was co-chair of the ISTD with David, then chair and president. In 2018, she was made an honorary fellow in recognition of her unique contribution. Despite her success and stature within a primarily male-dominated industry, she always preferred her work to be appreciated on its own merits.

In 2010, we created a week by week calendar, consisting of 53 pages, with each page featuring a type character — 26 lower case, 26 upper case and an ampersand. 26&26 was designed for Font Shop, Font Works and Atomic Type. We allocated an individual character to 53 of the country’s leading designers and typographers, and asked them to choose their favourite typeface of that character choice, and to write a short piece about why they liked it so much. 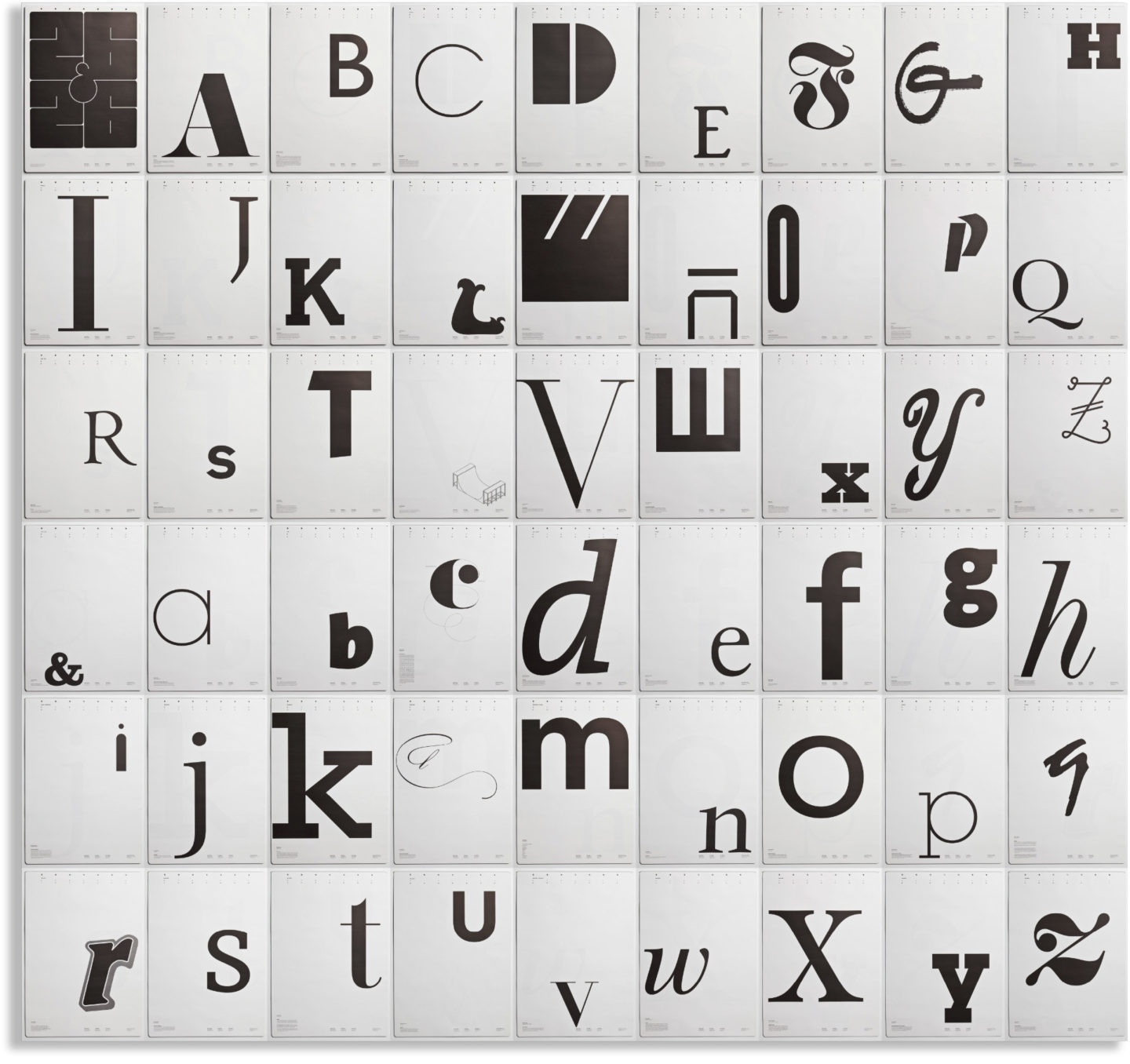 Naturally, Freda was one of those we asked. It’s perhaps typical of Freda that, although she could easily have chosen one of her own designs, she picked Wim Crouwel’s New Alphabet. Freda and Wim had collaborated together through their work at The Foundry and she had been pivotal to a much celebrated show of his work at the Design Museum in 2011. 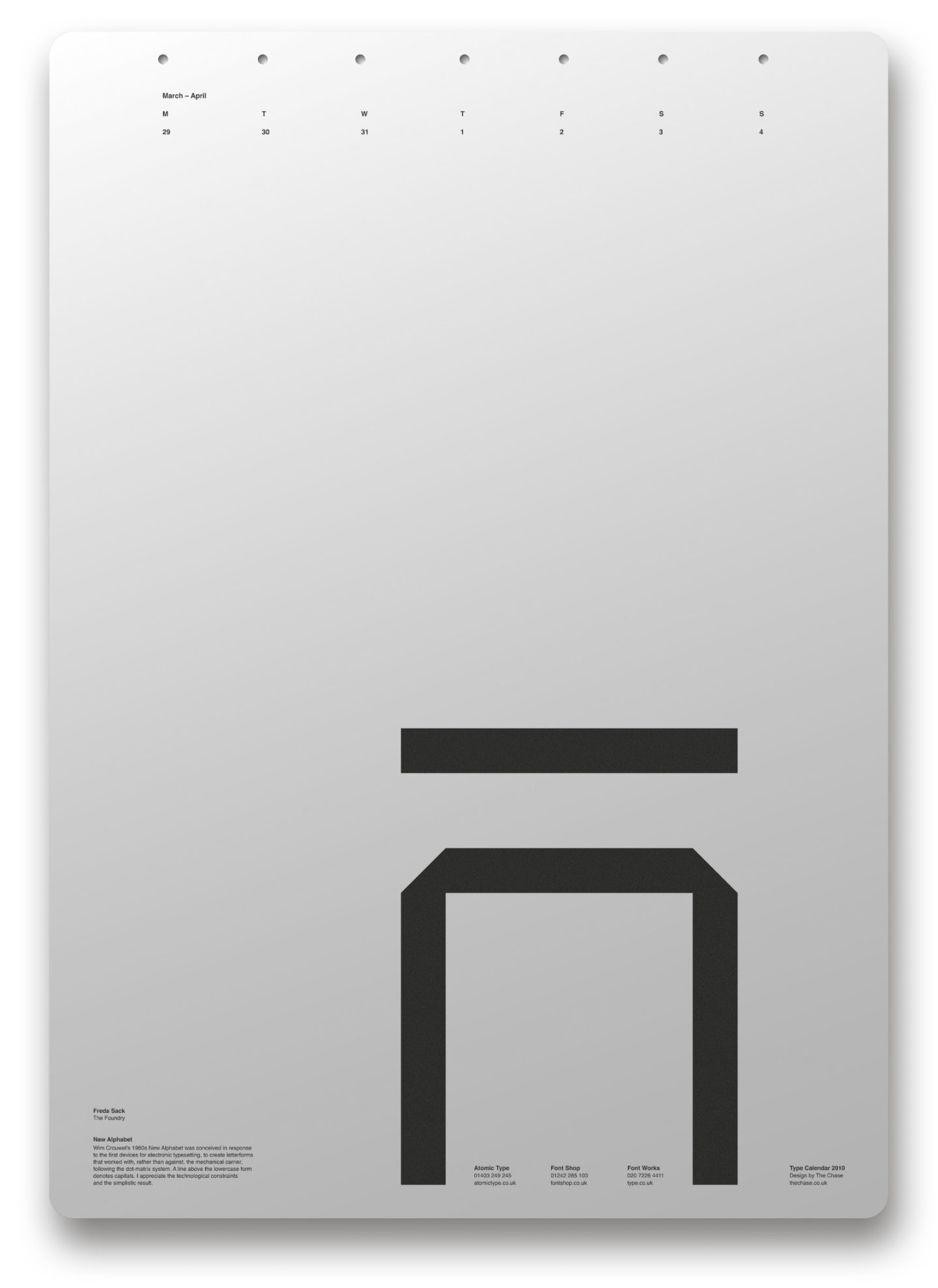 She said ‘Wim Crouwel’s 1960s New Alphabet was conceived in response to the first devices for electronic typesetting, to create letterforms that worked with, rather than against, the mechanical carrier, following the dot-matrix system. A line above the lowercase form denotes capitals. I appreciate the technological constraints and the simplistic result.’

This for me seems to perfectly sum up Freda – a deep appreciation of someone else’s skills, with the depth of understanding of the task involved and the elegance of its solution. Freda passed away in 2019 after a short illness, but her legacy lives on in so many ways. I for one am inspired by her life, and her passion for her work. Long may it continue to do so.